Mars and Murries, the inventors of one of the most popular candies on earth, M&M’s, originally named their product after themselves, but I’m convinced these two candy gods labeled the chocolate with an evil subliminal message: Mindless Munching. 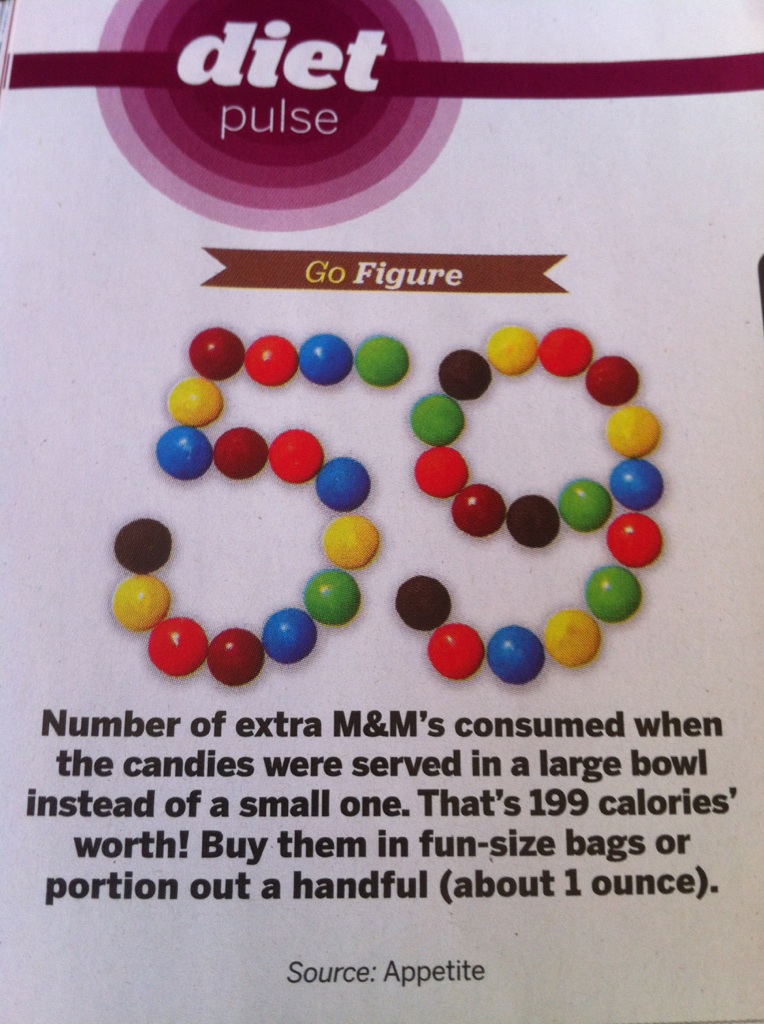 Along with nuts, M&M’s are a great social treat that are commonly served in large bowls at a bar or at a friend’s BBQ. They’re perfect because they’re small enough to quickly chow down so you can continue socializing with others. But just like that, you’ve become a mindless munching machine, oblivious to the amount of candy you’re actually consuming. Subconsciously, you keep eating, and it’s okay because just one little piece can’t do any harm- it’s so tiny, therefore, it contains only zero calories.

NEWS FLASH: If you do the math, one single ityy-bitty M&M is about 3.5 calories and one bag has around 70-80 pieces (around 260 calories), and Fitness Magazine reports that on average, people consume 59 extra M&M’s when eating from a party bowl, and that’s almost 200 extra secret calories you had no idea you were even ingesting.

“We tend to overeat which can lead to gaining weight without even knowing it,” says Susan Albers who has been a clinical psychologist for 10 years now and is the author of the 2009 book, Eat, Drink, and Be Mindful: How to End Your Struggle with Mindless Eating and Start Savoring Food with Intention and Joy. “Eating is one of those things we don’t have to work hard to do, so we can do it automatically. You don’t really have to think about it and you can eat an entire plate of food.”

But no fear, here are some tips to prevent your mindless munching: 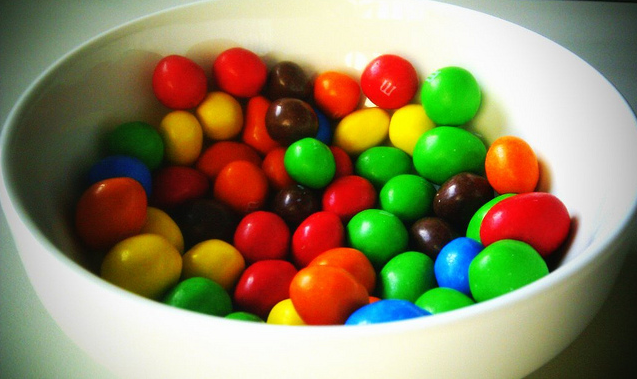 1. Try using the other hand. Think about it, when you reach over across the table to grab a handful of M&M’s, what hand do you use? The hand that you use to write with.  So one technique that can help reduce your munching is to eat with your non-dominant  hand. “It disrupts that flow of mindless eating, and that can reduce your eating by 30 percent,” says Albers. “Same thing if you’re using utensils. It’s almost like if you’re trying to write with the other hand, it’s a little more challenging.”

2. Make sure you always take a mindful bite. Whether you’re talking with a friend or watching TV, it’s easy to put your attention on something else other than the food that’s right in front of your face, often making you eat too fast and too much. So sit down and acknowledge each and every single one of your bites. “[Make] sure you eat slowly and pay attention to how the food tastes and how it smells,” says Albers. “Each bite really matters.”

3. Don’t do what your friends do. Numerous studies have proven that a friend’s eating habit can heavily influence your own, whether they eat healthy or not, and this is because we tend to “mirror” what other people do subconsciously.  So make sure you’re not playing ‘follow the leader’ next time you’re at lunch catching up with your high school pals. “You have to be very mindful of who you’re eating with and how fast they’re eating,” says Albers.

So there ya go! Now let’s make M&Ms stand for Mindful Munching.

“When you’re mindful, you’re more in charge and in control of what you’re eating,” says Albers.